Finding Her Way Back by Heather Van Fleet has found its way to booksellers TODAY! 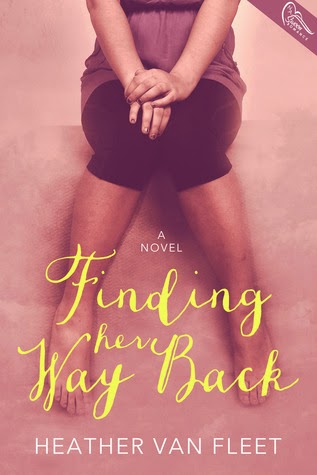 Summary from Goodreads:
Meet Callie. She’s nineteen, quirky, and fears commitments. She also has a love/hate relationship with her tennis shoes.

Nine months of college, done and gone, and all Callie has to show for it is her freshman thirty. But alas, no worries, life has other crap plans for her now. Plans that include a set of nuptials from hell for her older, she–devil sister Anna. Struggling to rid her chubby–sexy vibe, Callie is put on a strict Anna regimen of ‘do this do that’ while attempting to avoid the unavoidable. The unavoidable being Ky Hampton: her once skinny–skater–boy turned sex–god, ex best friend from across the street.

Kylan feels as though he is a waste. A mechanic, country music singer with not a lyrics to his name. A boy with a proverbial skateboard still strung around his neck from high school. He’s lost, and he’d be the first to admit it. But the moment he spots Calla Lily––with a cemented penis in hand––the more he realizes that she’s exactly the muse he’s been missing.

But when the going gets tough, and the secrets of her past grow thicker, Callie has to figure out if her tennis shoes will be her escape this time around in life, or her demise instead.

He’d instilled in himself a self–imposed, undying oath to be the man she deserved, but also he’d continually promised Brent that he was going to do everything in his power to make his little sister happy again. His best friend might have been a little pissed knowing how many ways he wanted to make her happy and all, but Brent also had known since they were fifteen how in love with Calla Lily Ky had been. Called him out on it several times actually.

Also warned him to keep his “dirty–skater–hands” to himself.

Good thing he gave up the skateboarding almost a year ago.

“Depends on what you mean by starting over, Cal.”

Running her finger over the pulse beating in his neck, she whispered shyly up at him. “Ask me out on a date.” She shrugged, sucking that bottom lip harder into her mouth. “Hold my hand. And then maybe on date five…” She shrugged again, her fingers tracing down his chest, and around his belly button. A throaty groan escaped his mouth, and the little naughty thing smiled at him. “I’ll let you touch me.”

Fuck … Hell, she was the devil’s angel, dammit! And he wanted to do way more than just touch her!

Trailing his hand along the dip of her t–shirt again, he matched her all too seductive cues. He made sure to let his pinky finger run along the nipple that was pressing tight against the surface of her shirt.

He’d do whatever the fuck she wanted to do…starting tomorrow.

Tonight, he would do things his way.

Midwestern native Heather Van Fleet lives in a small town on the Iowa/Illinois border. She’s a wife to her hubby--and high school sweet heart--Chris, as well as a mom to her three little girls, Kelsey, Emma and Bella. When she’s not obsessing over her fictional book characters, cooking dinner, or running around chasing her crazy kiddos, you can usually find her with her head stuck in her Kindle, sucking down White Chocolate Mochas like they're water.