COVER REVEAL: One Summer With Autumn by Julie Reece

Be on the look out for this upcoming release from
Swoon Romance!

I was an early reader and I highly recommend this delightful contemporary romance from favorite, Julie Reece!

Be sure to enter the giveaway found at the end of the post!

Wearing anger management issues like a second skin won’t help Autumn win her dad’s approval for the big trip she’s been planning—or meet his condition that she successfully complete a summer internship for college.

Autumn’s cool unravels when her sister lectures against disappointing the family again. And when a young, bearded guy steps through the crowd to settle the growing argument between siblings, Autumn lashes out, dubbing him a “Duck Dynasty wannabe.”

At Nineteen, Caden Behr is clueless as to why his man parts are threatened by the fearsome girl before him. He'd only come to find an intern for his recreational equipment company, not break up a girl-fight between two sisters.

Unfortunately, the only candidate left is the girl who just told him off. Without her, he’ll never prove to his CEO mother that he’s ready for more responsibility.

Because despite her best efforts to scare him off, and his fading desire to push her into the lake, they’re beginning to enjoy the time they spend together. But pride is a hard habit to break. And if neither will admit their changing feelings, they could lose a whole lot more than one summer.

As a child, Julie’s summers were about horseback riding and fishing, while winter brought sledding and ice-skating on frozen ponds. Most of life was magical, but not all. She struggled with multiple learning disabilities, and spent much of her time gazing out windows and daydreaming. In the fourth grade (with the help of one very nice teacher) she fought dyslexia for her right to read and won.

Afterward, she invented stories where powerful heroines kicked bad-guy butt to win the hearts charismatic heroes. And then she wrote one down…

Writing ever since, Julie weaves southern gothic, contemporary, fantasy, and young adult romances. She enjoys sweeping tales of mystery and epic adventure… which must include a really hot guy. Her writing is proof a dream and some hard work can overcome any obstacle.

Complete the Rafflecopter below for a chance to win!

ALL NEW! Second Edition of Louder Than Words is Now Available for Sale!

...and it's been re-edited to spiff it up even more with bonus material--Chapter 1 of a spin off story--at the end!

It's in Amazon's Kindle Unlimited program until approximately Dec 6th (so you can read if for FREE if you're a KU member) and then I'll list it with the other eBook sellers, like B&N, Kobo, etc.

Louder Than Words is also now in paperback format!

(Ok maybe that's not the best reason to gush, but I kinda love it, personally.) 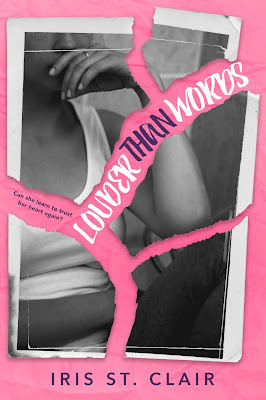 If you've recently tried to purchase Louder Than Words from Amazon but couldn't, my apologies. The book is in a bit of a transition from one publisher to another. I'm so excited to announce that it will be back very SOON in ebook format on multiple bookseller platforms AND in print! (I just uploaded the files this past weekend but need to do some quality control checks first.)

Here's the new "back of book text":

I thought I’d hit rock bottom when my dad died.

I never dreamed my mom would choose drugs and alcohol over me.

I was wrong about that too.

I thought teachers were there to instruct, to guide, to counsel. Wrong doesn’t begin to describe what nearly happened that last day of my Junior year. Lesson learned; trust is for suckers and actions speak louder than words.

New plan. Keep up my grades, earn a scholarship, tuck into as tight a ball as possible and roll on out of this town and this life.

But this boy, this Casanova transplant with a funny accent, who’s way too charming to be healthy for a girl... Why won’t he let me be?

I wish I hadn’t let him in on my secrets...well, most of them.

I wish I hadn’t grown to look forward to our daily walks to work.

But mostly, I wish I hadn’t freaked out when he tried to steal a kiss.


As a bonus, I'll be including the first chapter of the sequel to Louder Than Words, Lizzy's story, called More Precious Than Rubies.

I hope you'll add it to your Goodreads To Be Read shelf if you haven't already.