What Makes a Story "NEW" Adult vs. Adult?

I wish I could say I was a new adult...sometimes. There's a lot to be said for the ease of youth--taut dewy skin, supple joints, stamina and speed--but maturity ain't so bad either. I made some choices in my younger days that might have killed me, but ultimately made me stronger in a different sort of way, like forging steel in fire.

Where am I going with this?

Where is the divider line between those experiences that might be defined as either "coming of age" or post coming of age, experiences that thrust the protagonist up against or over the line into fully adult territory vs. just being an adult adventure? Is there a divider or is the nature of the experience and/or the chronological age of the character what separates the two reader groups? How raging is the inferno of experience that appeals to one age group vs. another?

I think perhaps it's a "I know it when I read" type boundary that is fluid from one reader to another. Admittedly, I've played with that boundary, subbing my book Louder Than Words as young adult to some, new adult to others. I also flirted with new adult in my other me's debut novel, The P.U.R.E.; I just didn't realize it at the time because there was no "new adult" when I wrote and marketed it.

The protagonist in that book, Gayle, is fresh out of college and starting her first job in her chosen career field, public accounting. Hmm... seems like that's new adult territory when you factor in all her bumbles and fumbles trying to avoid the tag that is the book's title--P.U.R.E. or Previously Undetected Recruiting Error. Gayle is green, green, green, to the post-college workforce, to corporate politics, to subtle (and not so subtle) misogyny and sexual harassment, to ultimately realizing how powerful passion can be--a recurring theme throughout the story. I think what makes Gayle appealing, and of interest to new adult readers, is her wide-eyed naivete coming into the story that slowly forges through fire into a more mature, and yes, more cynical, outlook.

Now other new adult stories I've read have taken the opposite tack. The protagonists in those stories begin beaten down and cynical, and through their fires, find hope, love, and optimism.

So, perhaps that is the key--the injection of cynicism or optimism to shove that youth into an adult who more fully realizes that life isn't a bowl of cherries, but neither is it a bowl of pits. The youth of the character makes the impact of that injection more noticeable and lasting, like a drop of black paint on a white canvas or white paint on a black canvas. As adults, most of us have acquired a gray cast--hence that other book--because the splatter has been absorbed and blended.

What do YOU think separates "new" adult from adult? Is it an age cutoff thing, like under 25 is new adult, over 25 (or whatever number) is adult? Share in the comments if you would.

P.S. If you're interested in my "new adult" debut, The P.U.R.E., it's 99 cents until the end of October. Click the picture to check it out! 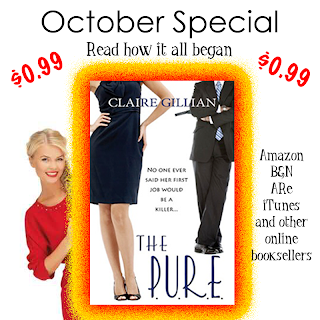