“Midnight Dawn straps you in from the beginning and whisks you away on an emotional, breath-taking ride of romance, fantasy, and good vs. evil. It's magic.” --Naima Simone, author of the SECRETS AND SINS series Midnight Dawn (The Mortal Machine #2)
Release Date: August 4th, 2014
Publisher: Entangled Publishing, Embrace Imprint
Genre: Paranormal Romance
Back of the book:
Her soul remembers his touch, even if she doesn’t.

With only three days until the wraith king turns the earth into an all-you-can-eat buffet, Addison Beckett is forced to enlist brooding sentinel Asher Green’s help to unlock the Mortal Machine. According to the founder, all she has to do is find the sanctuary—the same sanctuary she can’t remember because Asher erased her memories.

Trying to save humanity while navigating Asher’s lies is a royal pain. But the more time she and Asher spend together, the harder her soul tries to remind her what else he’s made her forget—that he loves her, wants her, needs her.

When she’s trapped by the wraith king and forced to pick who will stand by her in the coming battle, Addison is faced with an impossible choice: the sentinel she loves who refuses to love her back, or a powerful stranger who insists they’re meant to be together. Her decision will determine the fate of humanity, and once decided, can’t be undone. 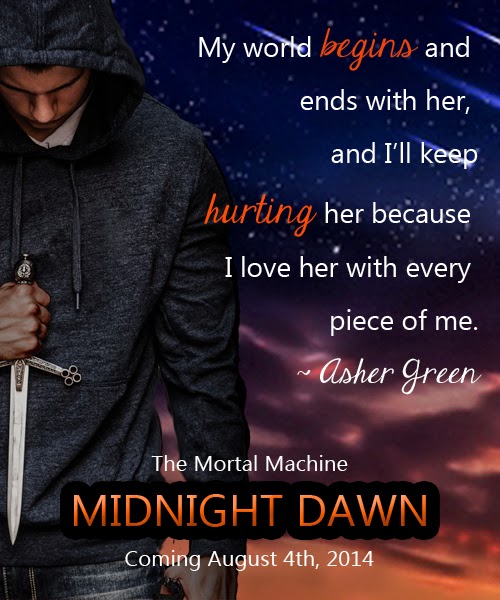 How about an excerpt too!

I stopped dead on the sidewalk, panting and hot in the summer night air, and turned toward the page that called my every cell. “Oh, you have got to be kidding me.”

Asher drew up beside me. “What wrong?”

I pointed up at the giant stone building with stairs leading up between the pillars. “That’s the American Museum of Natural History.”

He raised a brow, checked out the building, stared at me again. “The suspense is killing me, Plaid. I still don’t get what’s wrong.”

“Tell me why you call me that, and then stop doing it.” I kept my face pointed toward that thread of enticement beckoning me toward the giant horse statue and the stairs behind it. “Why do plaid shirts make me go all gooey inside? I know I was wearing one when you brought me to the facility.”

“Because you grew up a country girl and find some sort of sappy sentiment in bumpkin clothing.” He flashed a condescending smile. “I find it strangely amusing. Now, is the page in there or not?”

“I find it strangely amusing,” I echoed, mocking his aren’t-I-so-funny tone. Not. “And yeah, I’m pretty sure it’s in there. What do we do now?”

He returned to full hunting mode, darting glances at everything that moved, which wasn’t much at the late hour. “We go inside, find whatever object the page is hidden in, and zip out through the Shift with it. Simple.”

What? “How is that simple? I’m not breaking into a freakin’ museum and walking off with their stuff. That’s stealing.”

He shot me an oh-my-God-you-are-such-a-goody-goody look. “Well then, oh moral one, what would you suggest we do? Waltz in there and offer to buy it with the change in our pockets? It isn’t a department store. Even if we could scrounge up enough cash to buy whatever it is, where do you think our money comes from? The Machine certainly doesn’t have a bank account or any sources of income.”

A young couple ambled toward us, so I held my verbal hurricane until they passed by. “Are you saying everything we have that Izan doesn’t make is bought with stolen money? The guns? Sophia’s material? The food?”

“We only take from those we cleanse.” He looked away at the last.

Murder, he meant. The guardians used to kill people they couldn’t pull the wraiths out of, the only surefire way to destroy a bugman before I’d shown them another. As that thought percolated, I slowly clenched my fists. “A victimless crime, right? They were already dead, and, after all, they can’t take it with them. You can’t even look me in the eye while you say that, so don’t try to pass that off as okay.”

“I didn’t say I thought it was okay,” he snarled.

His lips parted, and his demonic expression suggested he was thinking of arguing some more, but he shrugged. “You’re the Architect. If you have a better idea, I’m all ears.”

Still fuming, I considered our options. We didn’t have money to buy whatever artifact contained the page, even if the museum had been open and curators were willing to sell a priceless object. They wouldn’t give it to us, since they didn’t know us from Adam’s elbow, and we couldn’t very well tell them who we were and why we needed it. Hell, I wasn’t even sure why we needed the pages, only that we did. We were out of time for my moral compass to find north.

After minutes of brain-melting thought, I kept coming back to Asher’s smash-and-grab solution. “Fine, we’ll steal it. If we can get the page out without destroying the thing, then we’ll give the object back.”

His smile turned smug. “Shall we go, then?”

Jocelyn is an office grunt by day and creator of romance and adventure by night. Born a farmer’s daughter with a vivid imagination, she spent her childhood dreaming up stories.

With no formal training, she relied on the honest feedback of her writing group to take her from that first short story all the way to THE END of her first novel. She now has five published novels and has recently signed a 3-book deal with Entangled Publishing.

When she isn’t slinging words, you can find her shooting her bow or enjoying the serenity of family life in her little house in the woods.

I'm not sure I realized just how soon Louder Than Words is coming out. So exciting! Thanks for helping me celebrate today.